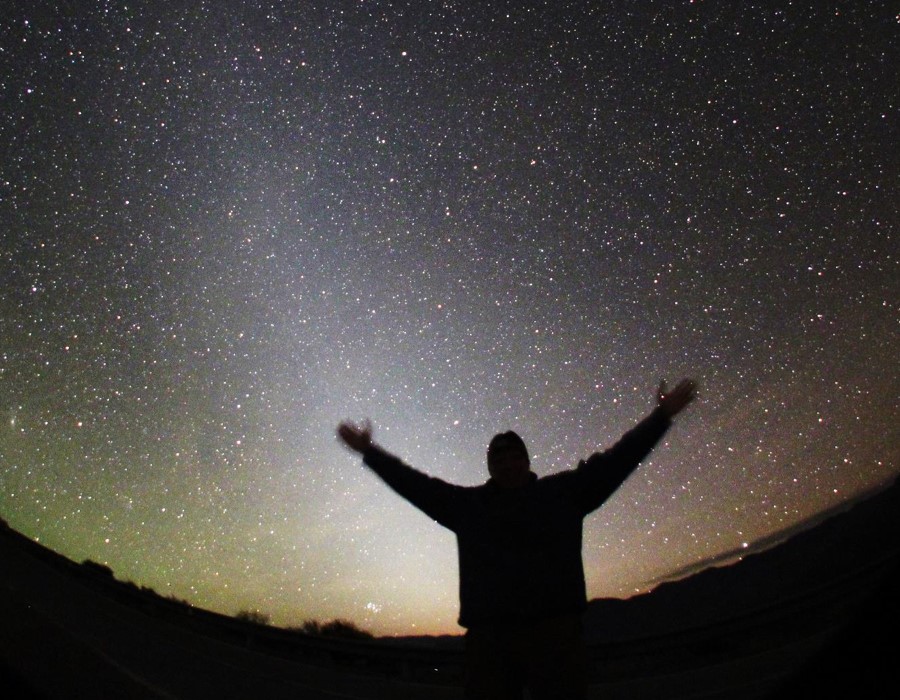 Hello Stargazers, my name is Peter Detterline, and you can think of me as a correspondent to Milky-Way.Kiwi from the north.  I discovered astronomy when I was 6 years old, watching Perseid meteors blaze across some dark Pennsylvania skies in the United States.  That star-filled firmament took me to new places in my imagination, and inspired me to learn more.  It is my hope to help guide you along your process of self-discovery as you look up into the heavens.  Today, I am an astronomy educator and planetarium director.

As the Astronomy Lead for the Mars Society I am responsible, along with my team, for maintenance, programs and the training of crews using the Musk Observatory.  This is where I met Hari, who is a treasured friend as well as a member of the Astronomy Team.  Most recently I was chosen to be part of the Astronomy in Chile Educator Ambassador Program (ACEAP), and just returned this summer from visiting some of the largest and highest observatories in the world.  My astronomical travels have taken me around the globe under both northern and southern skies, and I want to share those experiences and my images with you.  I am delighted to have the opportunity to bring my northern perspective to your star gazing experience.

What do northern hemisphere observers want to see when they travel to southern skies?

The first thing that excites the mind is the fact that the sky will be different.  New constellations and bright stars.  When you look at the night sky long enough, and you recognize the stars and constellations as old friends, you can travel almost anywhere in your hemisphere, and it looks like you’re in your backyard.  You grew up with them, they are constant, they are always there outlining the mythology of your culture.  Go to the opposite hemisphere and the sky is different.  It’s like travelling to an alien planet.  New constellations and stars adorn the heavens, and you get the exciting opportunity to relearn the sky just as you did when you first starting looking up; it takes you back to your roots.

Ask most northern stargazers what they know about southern constellations and stars and they’ll reply, “The Southern Cross, and Alpha Centauri, no pole star, and a whole bunch of constellations that make part of a ship, and Apus the Bee!”  Sometimes, the northern learned will substitute Apus the Bee for Musca the Fly.  I think we just like the names.  My first night in Chile this summer I was walking to dinner along with the other ACEAP ambassadors (all from the United States), and one of them pointed up and said, “Look, there’s the Southern Cross and Alpha Centauri”.   All of us gazed upward through the light pollution of a city street in Santiago with mouths agape to see a washed out version of the most famous of the southern sky welcoming us to their part of the universe.  And then a car politely honked their horn, and we moved out of the street, laughing, pointing, and staring skyward.

I smiled every morning in Chile watching Orion rise toes first in the sky.  It might put a smile on your face to watch him peek above the horizon as he rises in the northern hemisphere.  We all have a unique perspective of the universe, and our lives due to our experiences.  When you look up, be humbled by the vastness of the universe, but above all keep learning and put a smile on your face, be filled with the joy that is the universe, and let that wonder take you to new possibilities.